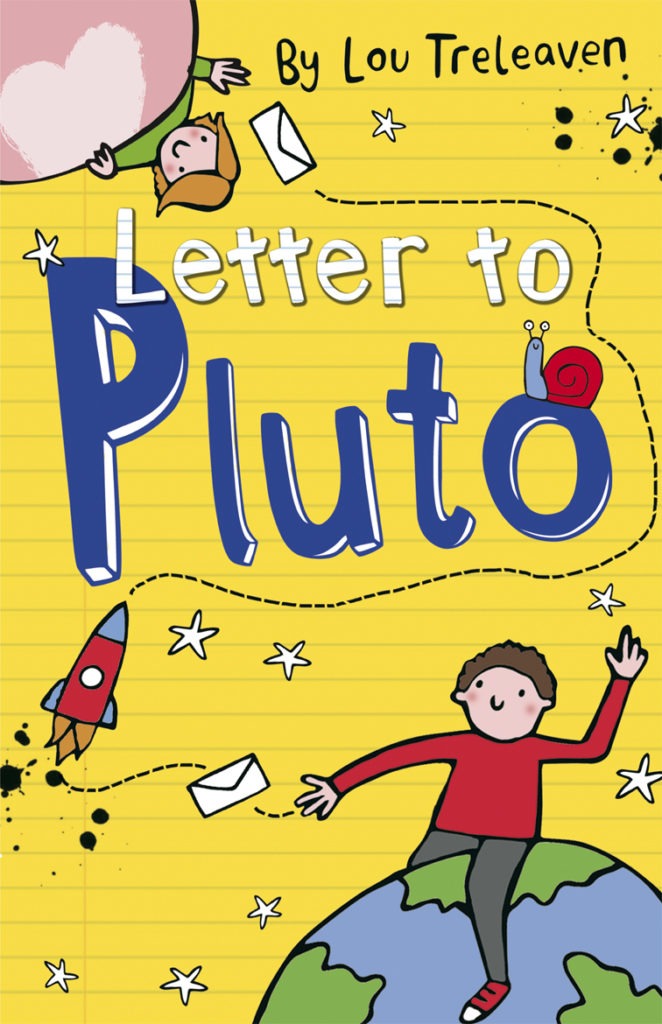 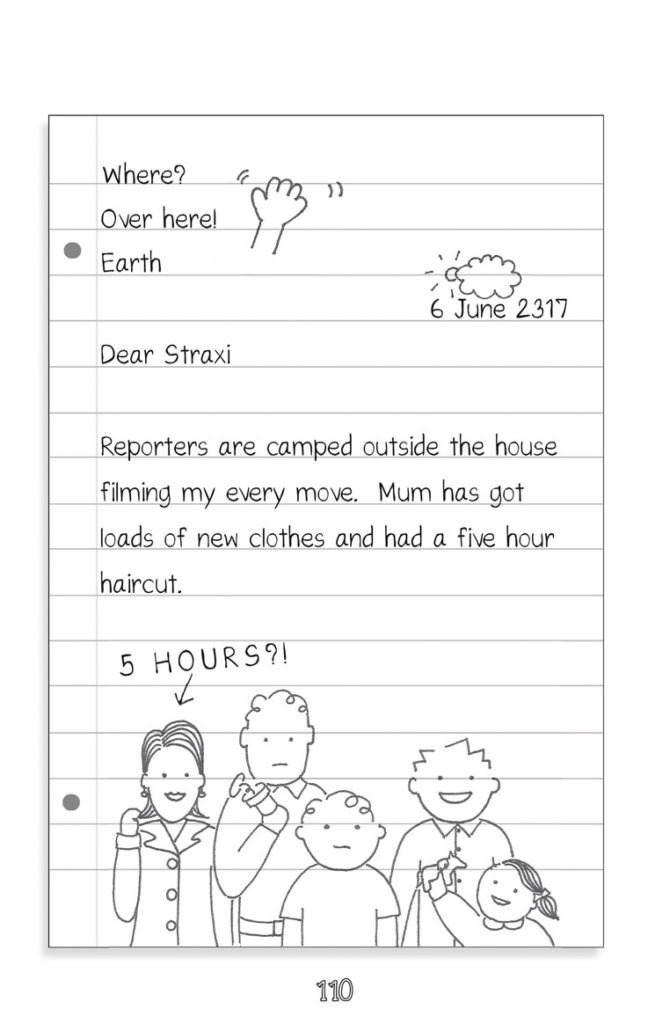 What did you like about the book? This book is a series of letters between two penpals–  Jon on Earth and Straxi on Pluto. In an attempt to preserve the “dying art” of letter writing, Jon’s teacher Mrs. Hall has arranged for her class to be pen pals with a class on Pluto. The year is 2317 and people have relocated from Earth to Pluto. As Jon and Straxi communicate through letters, the reader learns about their families, hobbies, friends, and life on Earth and Pluto. The two pen pals realize they have a lot in common such as family dynamics, pets, friend relationships, and school. There are also some major differences–yummy treats on Pluto are called whirlywangs, there is a common bug called a swamp snarlger, and Pluto has a six-foot tall bird called a blue-headed skwitch. Pluto also has a great deal of  vomblefruit trees and this fruit smells so awful that the president of Pluto wants to get rid of them all because he feels the smell is negatively impacting tourism. During their letter, Jon and Straxi are able to exchange a few items. Jon sends her an old-fashioned quill pen and Straxi sends him a vomblefruit. This fruit does smell awful, but Jon’s mother takes it into her greenhouse to study (she is an avid gardener).

All kinds of interesting things happen as the story progresses. Jon’s grandmother is traveling to all the different planets and she stops in to visit Straxi and her family. Jon continues to improve on his letter writing, so much so that Mrs. Hall wants to make him an “Ambassador of Handwriting” (much to his dismay). The most significant event that is happening is that the president of Pluto enacted a plan to kill all the vomblefruit trees by spraying a harsh chemical. This worked to kill every tree on the plant, but it also created some grave consequences–animals that depend on the fruit for food are also dying. Fortunately, Jon’s mother has one remaining plant and she sends the seeds to Pluto to repopulate the trees. Jon and Staxi become heros and Jon and his family are flown to Pluto for a visit.

What I think will appeal to children is that this book is divided into sections based on the letters going back and forth. This keeps the reader engaged because they go back and forth between life on Earth and life on Pluto. The letter format helps to make the reading more manageable, so kids can read as much or as little as they please. There are also cute little drawings and notes on the margins of the letters (similar to Diary of a Wimpy Kid) and that will be entertaining as well.

Anything you did not like about the book. Nothing

To whom would you recommend this book? This book is perfect for children in the early elementary grades, especially if they enjoy books such as Diary of a Wimpy Kid and  Dork Diaries–a story written in a diary format.

Who should buy this book? Public and elementary school libraries.

Where would you shelve it? Juvenile Fiction

Thank You!
Read the full review here, and find more from Youth Services Book Review here!
Purchase Penpals on Pluto book one in the UK and US.