The funny folks over at Snort! have got their hands on Jenny Moore’s latest middle-grade adventure, Audrey Orr and the Robot Rage; 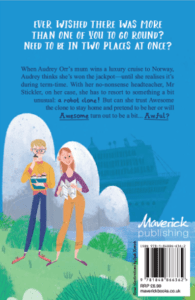 If you like fart gags (and you wouldn’t be here if you didn’t) Audrey Orr and the Robot Rage is going to be right up your gate. That’s Norwegian for ‘street’. You can laminate that and stick it on a flash card. But I digress. Fart gags are just the start in this gag-heavy romp. There are athlete’s foot jokes aplenty, too; zany, knitting grand-dads; head teachers in false beards and every kind of wackiness in between, some of which will make your eyebrows shoot up your forehead. I can honestly say I never thought I would read a book that contained the line “Audrey remembered the giant robo-turd”. It made me do a proper, wet, snort. Every book should contain that line. Could someone please send Hillary Mantel a memo.

Let’s get down to it then. The story starts with Audrey’s mum winning a Scandinavian cruise holiday, and so begins a deluge of barmy. Audrey’s boil-kneed headteacher won’t allow her to take a holiday during term time, under threat of expulsion. But in between knitting colanders and car aerial warmers her grand-dad finds an intriguing advert in Men’s Knitting Weekly while sitting on the toilet. It may just solve all his granddaughter’s problems. Mad professor A. N. Droyde fashions a perfect robot copy of Audrey to take her place at school so Audrey can take full advantage of the ship’s onboard a Soft Scoop 2000 ice-cream machine while sailing from fjord to fjord.
But uh-oh, what’s this? When Audrey’s robot stand-in – or Awesome as Audrey has named her – hears a song called ‘Robot Rage’ on the radio it sends her into a … well … robot rage. Awesome becomes Awful, intent on stealing Audrey’s life before crushing humankind beneath her techno-foot.

I’ll leave it there because spoilers, but the story belts along at a pace and every page is liberally sprinkled with gags and bonkers characters. The whole Orr family is quite, quite barking but Audrey’s dad with his foot-fungus fixation especially spoke to me (hey, we’ve all been there). Stuffed with silly, and with a massive gag-per-pence ratio, Audrey Orr and the Robot Rage will appeal to readers at the younger end of Middle Grade. Obviously, every reader’s sense of humour is different but with so many jokes everyone is sure to find something that will make them chuckle.

Thank you, Martin!
Read the full review and others here!
Purchase this Robo-tastic book from Amazon!