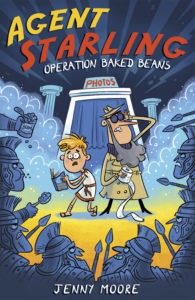 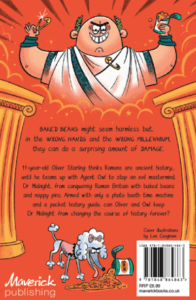 Oliver thought his day was going to be pretty normal when it started. But a stranger in a long coat and fake beard has other ideas for him. With top marks in a recent school project about Romans, Oliver has been chosen as the perfect new recruit for the Secret Service as they travel back in time to the Roman Empire.

Their mission is to stop the evil genius, Dr Midnight, who is trying to rewrite history by selling nappy pins and baked beans, amongst other mod-cons, to the ancient Romans. But everyone knows you mustn’t muck about with the past… right?!
Time travel seems simple enough when you have the perfect photo booth as your transport to the past. But Oliver soon learns how quickly things can go wrong when you are chased by an angry dog and forced to jump in a cart taking you miles away from your portal back home.
Luckily for Oliver he befriends Julia, cunningly disguised as a boy, who has dreams of joining the Roman army to get away from a life of slavery.
Together Oliver and Jules embark on a fast-paced, nerve-wracking adventure to try and stop Dr Midnight from changing history.
With death defying stunts involving some finger knitting, not to mention struggling with the peculiar habits of the Romans, Oliver must battle hard if he’s ever to return back to the safety of the current day.

Told with great wit and very many chuckle-worthy moments, this book is perfect for any fan of zany humour and crazy characters. Although Oliver is an unlikely hero, he manages to step up to the challenges thrown at him with brilliant results. The supporting cast are varied and wonderfully rounded. I have a particular soft spot for Agent Owl and his dubious dress sense. The end of the book leaves us wondering whether there may be more trouble to come. And I hope there is as I’d love to see more from this series.